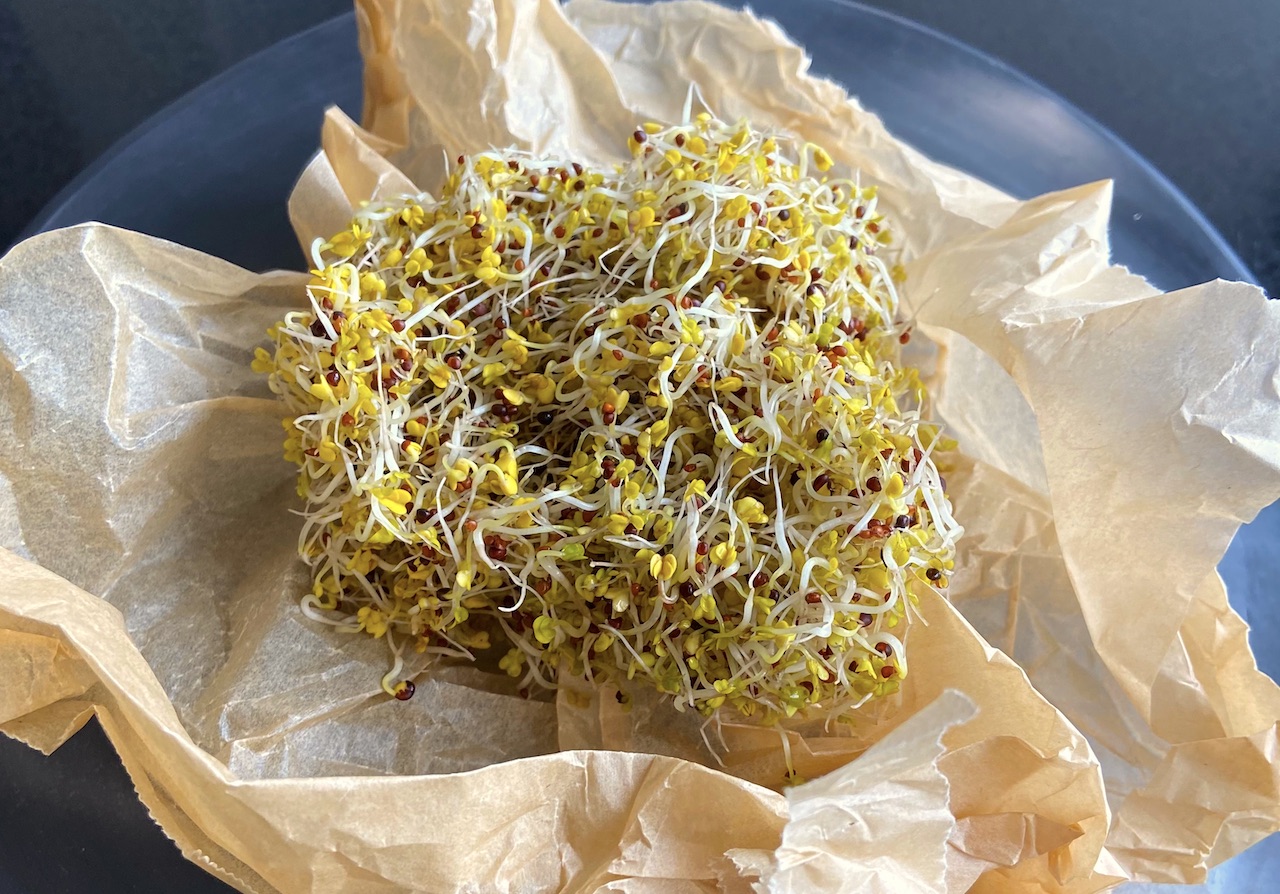 You’ll hear nutritionists talk a lot about nutrient density, and I mean a LOT – which foods can have the biggest impact on your biology and ultimately your health without having to consume an entire head of broccoli a day, which let’s face it, isn’t that appealing or particularly practical.

This is where I get excited about sprouts, and one in particular – broccoli sprouts! And more specifically about the compound sulforaphane which is found abundantly in them.

Consider them the top sprout going around. You won’t find anything that will compare with the impact that these small, relatively tasteless, fluffy rootlets will have on your overall health. And better yet, and this is what I really love about them, you can only get the true benefits of them in food-form.

What do I mean by food-form? Well, in many cases, the powerful phytonutrients contained within foods can be synthesised and packaged up into supplements. Nothing wrong with that from my point of view, but what’s ingenious about broccoli sprouts is that to get the real benefit from them, their T&C’s for consumption require good old-fashioned chewing and digestion to activate sulforaphane.

But first, let’s take a step back and talk about glucoraphanin, the precursor to sulforaphane. Glucoraphanin is contained in minuscule vacuoles within the cellular structure of broccoli sprouts alongside an enzyme called myrosinase. When the sprouts are “damaged” through cutting, chopping, chewing or blending for instance, low and behold, glucoraphanin is activated by myrosinase and sulforaphane is formed.

Broccoli sprouts are the most nutrient dense source of sulforaphane, but it is also abundant in other cruciferous vegetables like broccoli, brussel sprouts and kale. There’s plenty out there for everyone! However, broccoli sprouts pip all the others to the post having been found to contain 20-50 times higher concentrations of glucoraphanin – the precursor to sulforaphane. Consider them the gold standard!

With so much fanfare about sulforaphane, what does it do exactly? What are the benefits? Sulforaphane essentially switches on certain genes responsible for intensifying the detoxification process of drugs, toxins and carcinogens (otherwise known as xenobiotics) and upregulating our antioxidant response (via the Nrf2 pathway for all the biochem nerds out there). Kind of like a deruster for the oxidative stress that builds up in our bodies.

Equally, it has significant influence on the off-switch associated with the inflammatory response within our body (Nf-Kb pathway for the biochem nerds once again). Sulforaphane intake, via the same pathway just mentioned, has an equally positive effect on our central nervous system by attenuating the neuroinflammation associated with many common neurological diseases.

Sulforaphane’s influence on our health reads like a who’s who of biological benefits. It is clinically linked to:

It should be noted that those T&Cs for consumption have a few specifics in the fine print which need calling out:

But fear not, our clever gut microbiome also has a back-up plan in the event of any deactivated myrosinase – the bacteria in our gastrointestinal system produces some of its own myrosinase to allow for partial formation and production of sulforaphane intestinally – what smart little bugs we have!

So, having lavishly geeked-out on broccoli sprouts for the past 10 paragraphs, I hope you have a new found love for these little guys and can find some simple ways to incorporate them into your daily health routine.

The simplest and easiest recommendation would be to add them to your salads and smoothies throughout the week – a small palmful at each serving would just about do it. Hey, you might go all out and start sprouting your own. But in the meantime, you can find them at most organic food stores. Enjoy!

Houghton C. (2019) “Sulforaphane: Its “Coming of Age” as a Clinically Relevant Nutraceutical in the Prevention and Treatment of Chronic Disease” Oxidative Medicine and Cellular Longevity

DISCLAIMER: The information provided on this website is for informational purposes only and should not be used for diagnosis. It is not intended as a substitute for advice from your GP or other qualified health practitioner.

What happens to your microbiome during a course of antibiotics?

Why you should consider taking a high-quality multivitamin